Does love really knows no age? (The Freddie Aguilar controversy) 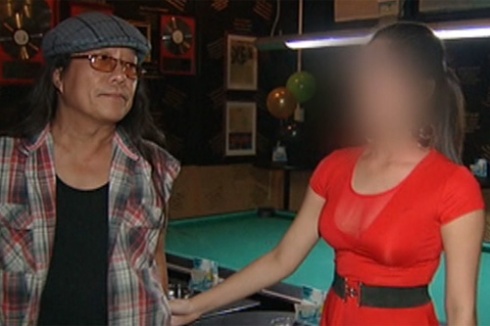 Photo by Miguel Dumaual of ABS-CBNnews.com

Manila, Philippines –The controversial relationship between the 60 yo popular singer Freddie Aguilar and 16 yo [girlfriend] has not showed any signs of slowing down since the story was brought to the public’s attention almost a month ago.   It turns out, the saying “love knows no age” is not that simple after all.  The Department of Social Welfare and Development (DSWD) is currently investigating the controversial relationship to protect the interest of the child and by this, it means that they would want to know that the child was not in any way coerced by Freddie and the child’s parents.   At the same time, a separate complaint for qualified seduction was recently filed by Atty. Fernando Perito, a member of the Integrated Bar of the Philippines (IBP), against Freddie.  In his complaint, he said that he is “angered, offended and scandalized” by Freddie going public with his relationship and even called him a “sex-hungry child predator” and a “cradle snatcher” – casting doubts to Freddie’s sincerity and true reason for the relationship.

I write not to pass judgement against Freddie, his girlfriend, the parents or to anyone for that matter.   How could I? I don’t have all the facts, nobody does.  Nobody knows the real story.  All we know is that Freddie and the minor aged girl publicly confessed their love and affection for each other, and that this relationship has the blessing of the girl’s parents.   To some people, this is enough reason to leave them alone.  For others, they’ll probably want to know why and meddle a bit more for various reasons – some reasons are sincere such as to ensure that the child’s interest is protected, while some might just have nothing else to do in their spare time.

Is society right in meddling in the private relationship of people?

By default, society should respect the private lives of people.  To know if a person really loves another is to go deep into the person’s character, experiences, background and history.  And, in some cases, the answer would even lie deep in a person’s subconscious even the person himself (herself) wouldn’t know if he’s really in love or not.  Bottom line, nobody can pass judgement on people’s feelings.  However, to protect the interest of the minor, the Law assumes that a minor requires more guidance in coming up with a sound and responsible decision; hence, the government (DSWD) will have to meddle a bit to ensure that the minor understands the consequences and that – given the child’s frailty and naivety – he (she) was not coerced in any way.

The Law does not prevent a minor (excluding those 12 yo below) from entering into a relationship.  The Law just wants to ensure that the minor was fully educated and was in no way coerced.  Now, how about the adult in this relationship?  Shouldn’t we have an age limit on the age gap?  Like people in relationships should have no more than 20 years age difference so that the relationship will work?  Freddie’s 60 and the girl is 16, crazy right?  It might sound crazy, but look around you, watch the news – numerous failed relationships coming from 2 adults.  A lot of times, even 2 consenting adults enter into a relationship for all the wrong reasons.  This is not to say though that the government should not interfere if a minor is involved, I’d still agree with DSWD investigating the case – there’s no harm adding another layer of precaution to protect the interest of the minor.  After all, if the minor is found to be fully educated and was not coerced, then the moral paradigm shifts in favour or Freddie.

Most will probably say No.  But add 60 and 16 to the equation, a lot would probably change their minds and say “Yah, age matters”, and some would say “Eeew” or “Yackies”.  Everyone’s entitled to his opinion and for as long that it’s not racist and has some sense to it- I and everyone else should respect those opinions.  This is such a case – I have mixed feelings about the 60-16 partnership.  After all, generally speaking, men do prefer younger and submissive women; while, women prefers more mature and established men.  Major Religions even glorify this – in the Christian Bible, it states that Women should be submissive while the Men should Head the family; In Islam, I think it follows the same tradition when it states that “Men are a degree above [women] in status”.    On the other hand, thinking about the 60-16 partnership seems ridiculous – imagine a 44 year old man still waiting for his girlfriend to be born.  It’s crazy and outrageous, but is it acceptable?  Not now, but eventually, I think it would.  For a long time, freedom against slavery was not acceptable, to the point that it triggered several major strife in the US.  For a long time, homosexuals were looked down upon and discriminated – but society changed and have slowly been accepting homosexuals as part of society.

Age shouldn’t really matter.  Why would it? Because of generation gap?  Maybe.  But the relationship might be more interesting because there are a lot more things to talk about – several generation of things for that matter.  We hate discriminating, but aren’t we discriminating if we say that two people can’t get into a relationship because of the age gap?  Not to be a hypocrite, but if I had a 16 yo daughter, being wooed by a 60 yo man, I’d disapprove and discourage my daughter.  But I wouldn’t stop my daughter from entering into a relationship with an older man if she really wants to.  I’d likely say that it’s my fault for not educating her properly, but still….  Age doesn’t matter in a relationship founded on sincerity and trust, and yes, I do expect to get some “Eeew” and “Yuck” reaction for my opinion.  Can’t please everyone, right?

A BPO MGR in the PHL. An avid reader, writer and a rap enthusiast.
View all posts by SLy M. →
This entry was posted in Entertainment and tagged Freddie Aguilar; Relationships; Controversy. Bookmark the permalink.

1 Response to Does love really knows no age? (The Freddie Aguilar controversy)

The few, the proud, the b-bloggers

Charles Beley
Lipstick and Chaos : The Fabric of My Life

Word of the Cipher